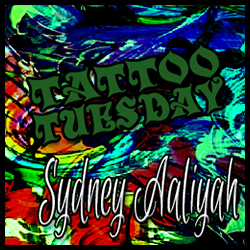 Tattoo Tuesday will be a constant feature on my blog, if only for my own amusement. I welcome anyone with a great tattoo and/or a great tattoo story to share them with the world. My tattoos are inspired by my life and at the same time inspire my life everyday.  Maybe yours can do the same for others.  Thanks so much A.M. Schultz for creating the Tattoo Tuesday Badge. Click on the badge to read past Tattoo Tuesday posts.

Several events across the world by some of the best tattoo artist in the world were held to raising money to help the museum and protect its collection.

It looks like the campaigned worked and the museum is going to re-open.  I wanted to share this because I love the way the tattoo community rallied together to support and save a piece of their culture and history.  People coming together to help each other is a beautiful thing.

Check out the related post for more information and see how you can help.

I know how Marvin feels.  I didn’t like one of my tattoo’s, either.  I had a great idea and a unique image reference, but my tattoo artist couldn’t quite capture my vision.

The tattoo didn’t turn out the way I wanted.

So, I had a few options.  I could have pouted and cried, threatened and accused, or criticized and complained.

And, I did a little bit of all that.  But in the end, I realized it was my tattoo. No one else’s. So, I could either cut my wrist off or I could learn to love it.  The former wasn’t a viable option.  Especially for a writer, I kind of need my hand.

I talked to the original artist and between of the two of us, we came up with a way to covered part of the bad tattoo with another image and still keep the same story and created a better tattoo.

It still isn’t perfect. But, I learned to love my tattoo.

If you get a tattoo and you don’t like it, there are options besides self mutilation (yeah, I get the irony of that statement considering some people think tattoos are a form of body mutilation):

When something significant happens in my life, I like to commemorate with a tattoo.  And, my first thought is to get a tattoo that signifies the occasion in art form.  So, when I finished the first draft of my first novel, I searched for the perfect image and I couldn’t find the exact image.  I decided to get an addition to an older tattoo.

But, I really liked the other writer inspired tattoos.  Let me know which one you like. 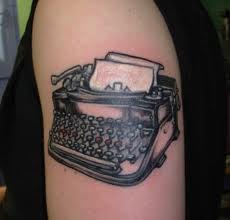 How do you record your work? Quill and Ink or typewriter.

This is a good one if you have an issue remembering how to spell or pronounce your favorite word.

There is always the  quote that changed your life and made you want to write. Or, tattoo your own brilliant prose.  I would wait until published before you do you own words incase they get cut in edits.

This is the one is my favorite. It is simple and to the point.

I think I will ultimately create an image that incorporates all of these great ideas. What writer inspired tattoo do you like the best?

I am so excited to feature the very talented D.C. McMillen here on Tattoo Tuesday. She has a great tattoo story and she has her mother to thank.

My Mom Talked Me into My First Tattoo

It was about 2am when I walked into a 24 hour convenience store. I was a scantily clad 19 year old who had spent the evening in the club district. He was a very large, young Asian man covered in tattoos, who worked behind the counter. We chatted about stuff I can’t remember, with the exception that his uncle owned the store and needed him to cover a shift, and then he asked if I was free the following evening. I told him I had plans to get my belly button pierced and if he would like to come along, I knew of a great little dive bar just around the corner.

For a man covered in large, detailed tats, his face flushed to a shocking shade of pink when he watched the needle pierce my skin. I laughed at his reaction and we went for dinner and drinks and then a party at my friend’s house.

My mother was, well, grossed out at my belly button ring. I told her I planned to go back to get another piercing the next week and she begged me to reconsider. I wasn’t surprised by my mom’s reaction. She had always had a weird thing about piercings. She did not work up the courage to pierce her own ears until she had reached her twenties and when I got my ears pierced at age eleven she could not even watch. She did go with me to the salon, though, and sat on a bench outside eating ice cream (her ultimate comfort food) while I went to my appointment. When I pierced another set of holes in my ears a year later with a needle and ice cubes, she almost passed out.

What did surprise me, however, was my mother’s suggestion that I get a tattoo instead of another body piercing.

“Why not? You’re creative, artistic and you have a great body. You can come up with something funky and oh so you. Put one pretty much anywhere and it will look good on you, sweetie.”

She had a point, even if she was contradicting herself by trying to talk me out of the piercing.

I had been designing tattoos since I was sixteen, selling the designs to a couple of tattoo artist friends, and had always planned to get one or two tattoos of my own one day. My mother’s unsolicited advice is what made me finally take the plunge. I did not use one of my own designs for that first tattoo, though, nor did I go to one of my friends to get inked. Despite the fact that my artwork had sold to more than a few buyers and a couple of paintings even hung in office buildings in downtown Toronto, I never felt confident in my work. I was not about to trust my body to a tattoo artist who was so artistically impaired that he liked my art. Instead I walked into a highly regarded tattoo shop on Queen Street and picked an image off the wall.

I did not bring the hot Asian guy with me this time; I went alone, which worked out in my favour because the artist who inked me turned out to be an even hotter, larger Asian guy with even more awesome tattoos. What luck!  😉

The tattoo I chose was a large tribal style frog on my shoulder blade. Many days in my early childhood were spent catching and releasing frogs. When I moved to the city I began collecting toy frogs, figurines, frog carvings, etc. to remind me of home.  I still have much of the collection.

I proudly showed my mom my new tat. It was a little larger than she expected but she liked it.

“See? Aren’t you glad you got that out of your system now while you’re young?” my mom asked.

“Actually, I made an appointment to get another tattoo next month,” I answered.

My mother rolled her eyes and grumbled that at least I wasn’t putting another hole through my body.

D.C. McMillen lives in Toronto, Canada. She enjoys writing about dirty sex in questionable places but has been known to write about other subjects, on special occasions.
D.C. is featured in MuseItHot’s Short & Spicy line up with The Rental and the upcoming story A Decent December. Her debut novella, The Rusty Nail, was recently published through Rebel Ink Press, and she is published in several print and e-book anthologies.
D.C. is obsessed with Twitter and invites you to look her up at @mcmillendc, on her blog, or on Facebook, where she goes sometimes.
If you would like to be featured on Tattoo Tuesday, send me your tattoo story.

This Tattoo Tuesday, I decided to share my most recent tattoo story.  Recent as in two day ago.

So, let me take you though it.  First I pick out an image.

I love lotus flowers and the meaning behind them.  They have a fascinating life.  The lotus flower begins as a seed buried deep into the mud and sediment of a lake or pond.  It pushes its way through the dirt and muck reaching for the light.  When passes through the murky water, it purifies it and makes the water clear.  The messier its surroundings, the more beautiful the lotus becomes.  It is inspiring to me to think that beauty can come from less then ideal situations.

Next, my tattoo artist takes my image and creates a stencil.  I have a couple of tattoos where the artist drew the image free hand directly on my skin.  This tattoo needed clean solid lines and was pretty specific, so the stencil was the way to go.

After she places the stencil, she gets to work on my tattoo. 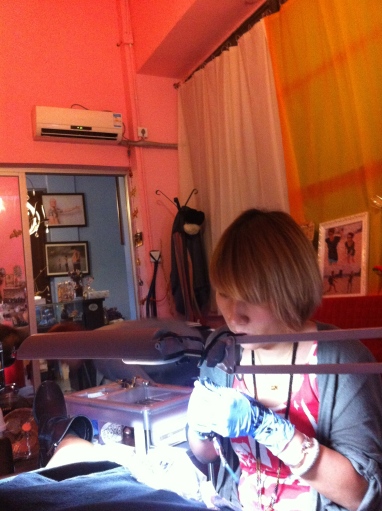 At this point, just imagine a hot nail being dragged across your skin like a hot poker and then mix that with the sound of a tooth drill.  It is so much fun.

But, if you can stand all that, you end up with something like this:

If you have a tattoo story to share, let me know.