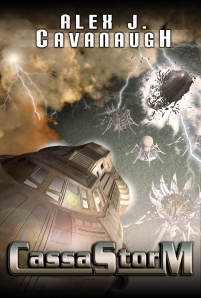 Comment on Alex’s blog this week for a chance to win a Cassa mug, mousepad, magnet, and swag!

When Alex volunteered to answer our questions, I’m not sure he knew what he was getting into. It was a great idea in order to engage his fans and allowing us to be a part of the most anticipated book release of 2013. My question:

What technological advancement in the Cassa series is most likely to be invented in our lifetime? What is the least likely?

We already have computer tablets in the form of iPads, although ours aren’t connected to a network at all times and no matter where we are. That would be handy. I can also see us developing spaceships with full gravity. (If we work fast enough.)

Sadly, I doubt we’ll ever see teleporters in our lifetime. Bummer.

Bummer is right. I would pay big money for a teleporter. No more planes and no more traffic!

From the Amazon Best Selling Series!

A storm gathers across the galaxy…

Commanding the Cassan base on Tgren, Byron thought he’d put the days of battle behind him. As a galaxy-wide war encroaches upon the desert planet, Byron’s ideal life is threatened and he’s caught between the Tgrens and the Cassans.

After enemy ships attack the desert planet, Byron discovers another battle within his own family. The declaration of war between all ten races triggers nightmares in his son, threatening to destroy the boy’s mind.

Meanwhile the ancient alien ship is transmitting a code that might signal the end of all life in the galaxy. And the mysterious probe that almost destroyed Tgren twenty years ago could return. As his world begins to crumble, Byron suspects a connection. The storm is about to break, and Byron is caught in the middle…

“CassaStorM is a touching and mesmerizing space opera full of action and emotion with strong characters and a cosmic mystery.” – Edi’s Book Lighhouse
“Cavanaugh creates such an unforgettable world, and these characters will stay with you long after their story is over.” – Cassie Mae, author of Friday Night Alibi and How to Date a Nerd

$4.99 EBook available in all formats

Alex J. Cavanaugh has a Bachelor of Fine Arts degree and works in web design and graphics. He is experienced in technical editing and worked with an adult literacy program for several years. A fan of all things science fiction, his interests range from books and movies to music and games. Online he is the Ninja Captain and founder of the Insecure Writer’s Support Group. The author of the Amazon bestsellers, CassaStar and CassaFire, he lives in the Carolinas with his wife. 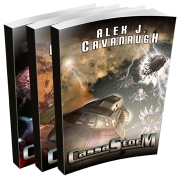