Synopsis: *Recommended 17+ due to strong language and sexual content*

Ness’s parents are shocked when she turns down her place at Leeds University and takes on a full-time job in a call center. Determined to begin her adult life the way she wants, Ness moves to Leeds to live with her best friend Abby.

One night she meets Evan, who is everything she hates about guys. He may be hot but he’s also drunken, arrogant, and on top of that, he apparently has sex with girls and forgets about it. But Evan isn’t what he seems and Ness soon discovers they have more in common than she thought.

Evan is struggling to escape from his past too, and when Lucy appears she threatens his new relationship with Ness. Unsure if she can deal with the effect Lucy has on Evan, Ness makes a decision about her future which pulls them apart.

When their new lives don’t go as planned, Ness and Evan are both faced with difficult choices. All because of Lucy…

Because of Lucy is free today on Amazon.

Author bio: Lisa is originally from the UK but now lives in Perth, Western Australia. She splits her time between writing, raising a family and running a business. She even leaves the house occasionally.

Lisa writes romance and is currently working on a series of new adult paranormal romance novels, the first book, Soul Ties, was published in July 2013. She also writes new adult contemporary – Because of Lucy was released August 2013. 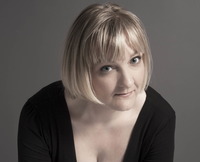 Synopsis: COMPLICATED BY YOU is a sexy New Adult love story about a girl who loves so deeply that it may cost her everything.

Evie’s childhood friend Jay has always had her back. But college complicates things as Jay starts dating Evie’s roommate Cynthia. Now, Evie spends her nights trying to sleep while Jay and Cynthia go at it like rabbits a few feet away!

Evie hates feeling like a third wheel and hates wishing it was her in Jay’s arms even more. It doesn’t help that Jay won’t let Evie date or even hook up without interfering and making sure everyone on campus knows that she’s off limits.

Something has to give. Evie can’t continue pining away for Jay, and Jay can’t continue to act like he owns her when he won’t so much as touch her. And worse of all, Evie can barely look Cynthia in the eye for fear she will know just how she feels about Jay.

Then one night shifts Evie, Jay and Cynthia into an web of love and deceit, tangling their hearts and forcing one of them to come to a compromise that will change all their lives.

How far should someone go for love?

Until it’s no longer convenient, or until it’s tearing apart their soul? Evie soon realizes that love isn’t always easy and loving someone isn’t as simple as it seems. Sometimes, it’s COMPLICATED.

Look for Evie and Jay’s story to continue in December 2013!

Author Bio: Dark fantasy bestselling author Kenya Wright always knew she would be famous since the ripe old age of six when she sang the Michael Jackson thriller song in her bathroom mirror. She has tried her hand at many things from enlisting in the Navy for six years as a Persian-Farsi linguist to being a nude model at an art university.

However, writing has been the only constant love in her life.

How far would you go for love?