**After Strength, but before Courage**

Hi Aiden, I am really excited to learn more about you.

Hi, Sydney! I’m excited to be here. Just a little nervous, though. I’ve never been interviewed before…

Don’t be nervous. I’ll start with an easy one. Tell me a little about yourself.There’s not much to tell, really. I’m a third year information technology student with glow-in-the-dark ginger skin. Or at least, that’s what Gabby calls it…

What do you look for in a girl?Oh man. That’s a loaded question. I definitely want someone who understands me, but I don’t want someone as… introverted as I am. Otherwise, we might spend the rest of our lives awkwardly staring at each other, you know? *grins*

She should be loyal, too, and compassionate. Maybe a little feisty…

Fiesty, uh? You sound like your describing someone specific. Are you involved with anyone at the moment?Uh, that’s a negative. The closest I’ve come is some girl who used me to copy homework.

What’s the craziest thing you have ever done for a girl? I honestly wish I had an answer to this one. When it comes to girls I like, I just… choke. I can’t tell them, let alone make some grand, movie-scale gesture. It’s pathetic, I know.

No, it’s kind of sweet. You can at least talk to girls. You’re really close with Rena, how did you two meet? Oh man. It was almost three years ago. We had freshmen comp. together, and some of our classmates liked to give me a hard time—which wasn’t really a new thing for me, so I tried to ignore it. But Rena didn’t. It was actually pretty cool. We’d barely even spoken before that, but she went off on everyone for being jerks. I think she even threatened to stab some guy in the neck with her pencil. Anyway, the professor suggested she study that chapter independently—meaning she got kicked out for a week—so, I tracked her down to give her my notes. As it turned out, we got along really well. Crazy, huh?

Sounds like she has no problem doing crazy things for her friend. She seems cool, but she’s dating Wallace. What do you think of him, do you two get along? Wallace… isn’t my favorite person. Unfortunately, he’s Rena’s favorite person, so I have to deal with him. All. The. Time.

That must be tough and Rena seems like she has a lot going on, must be hard being her best friend sometimes? Yeah, she’s always knee deep in one project or another. It’s cool, though. She means well.

Does she know how lucky she is to have a friend like you? Hah! Oh, I wouldn’t say that, Sydney. I’m lucky she and Gabby let me hang around. Seriously. I’m pretty sure I embarrass those two on a daily basis. But what are friends for, right? 😉 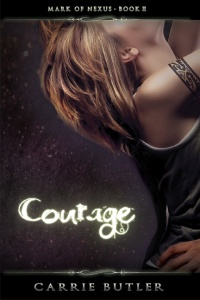 Short description: Rena Collins never thought she’d long for the past—back when affection from Wallace, her freakishly strong boyfriend, was the most dangerous aspect of her life. But now that the human-altering organization known as ERA has gone on the offensive, nothing is safe. Her bloodline is exposed, her relationships torn apart, and just when it seems like things can’t get any worse, ERA ups the ante. To save mankind from forced evolution, Rena will have to mend her broken ties and form a resistance… hand-in-hand with the one she hurt most.