I love sports romances and when I saw this book and had the opportunity to ask Katherine why she choose baseball (I’m a football girl myself), I jumped at the chance. – Sydney Aaliyah Michelle 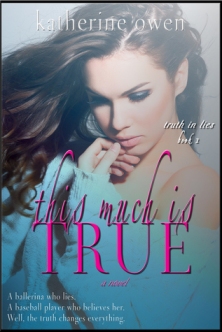 I’ve learned more about baseball than I ever thought I would in writing This Much Is True as part of the Truth In Lies series. At the beginning part of the process, in coming up with the bones of the story line, I needed a sport that had a long season that would play havoc in the hero’s personal life. Baseball fit that bill. Also, in baseball, it’s not unusual for a guy to be drafted early on and the longevity of a baseball player’s career is pretty long; all of that appealed to me as well in writing the character of Lincoln Presley. Additionally, the life of a talented baseball player is planned out fairly early on and that ends up being a factor for Lincoln Presley’s life choices. After all, there is only baseball.

Here’s a little excerpt from This Much Is True that demonstrates this so well:

Mindless sex with a stranger isn’t hard to find when you’re an athlete and even less so when you’re on the verge of fame because everybody wants a piece of that action. God knows I used to play into that, too; but the free-sex-no-strings-attached lifestyle catches up to you. As it turns out, everybody wants a piece of you or that action. You can’t really trust anybody to want you for you. They always want more. Now, I abide by strict rules of not getting involved with anyone—at least not often and never permanently—because there’s too much on the line with me and baseball these days. It used to be that saying yes to every invitation offered was a whole lot easier than saying no. Sometimes, it’s still that way. But now? The only thing that matters to me is baseball and keeping my dad happy. And we’re so close. I’m so close, as my dad constantly reminds me.

I’m actually a football fan more than a baseball fan but I have a growing admiration for the sport having done so much research about it. The same applies to the amount of research I’ve done on the life of a dancer in pursuing ballet. The comparisons in terms of dedication as well as the contrasts in terms of contracts and the politics involved in who you play for/who you dance for provides quite a bit of tension for these two in trying to be together. The tension ratchets up as the Truth In Lies series goes along in terms of career demands.

Synopsis:
Both on the verge of fame. A ballerina who lies. A baseball player who believes her. Well, the truth changes everything.

Tally Landon is just trying to survive the death of her twin sister, graduate from high school, and escape her tragic story by pursuing her ballet career in New York. She doesn’t count on Lincoln Presley, Stanford’s baseball wonder, to affect her at all. Adding him to a long list of one-night stands is the plan. Lying to him about her age and name is her standard method of operandi. She doesn’t count on being found out, on seeing him again, or falling in love.

Lincoln Presley’s life is all mapped out for him. There is only baseball. With Major League Baseball circling their favorite prospect with a lucrative offer, he cannot afford to mess up. And, he doesn’t; until he meets up with the girl he saved in that burning wreckage on the 101 on Valentine’s Day months before. By the time he learns her real name and of all the lies she’s told, he’s in far too deep to ever really let her go.

Fate has a different set of plans, but when fame and lies tear them apart, one truth remains.

Katherine Owen writes contemporary edgy fiction, which translates to: she writes love stories that are contemporary in setting and both edgy and dark. Some readers term her books emotional roller coasters. With her writing, Owen admits she has a fondness for angst, likes to play with a little drama, and essentially toys around with the unintentional complications of love. She contends this began early on when she won a poetry contest at the age of fourteen and appears to be without end. Owen has an avid love of coffee, books, and writing, but not necessarily in that order. She writes both Contemporary Romance and New Adult fiction which includes her bestselling TRUTH IN LIES Series (a series despite despising ‘series’) beginning with This Much Is True and her latest release, The Truth About Air & Water. The TRUTH IN LIES series is fan-driven. So. There will be a third book about Linc and Tally released in 2015 titled Tell Me Something True.

About Owen’s fiction…This is NOT the light trope stuff. She travels a unique, writerly path and enjoys writing dark and angsty (a “non-word” she is fond of) emotional love stories. She often warns readers to be prepared with: time, tissues, wine, Advil or your drug of choice. And, as her most favored character, Lincoln Presley, would say, “do what you must, Princess.”