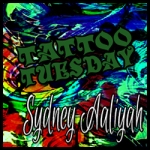 So excited to bring back Tattoo Tuesday and to feature some amazing people who just so happen to be talented writers.

First up, Suzanne Van Royen. Suzanne is not only the music guru for my debut novel coming out in April, but she recently released a YA Contemporary Novel titled, The Other Me.

1. How old were you when you got your first tattoo?

I was 21 and living in Finland on a student exchange. I got my first ink as a way to commemorate the most amazing 5 months of my life.

5 and counting 🙂 The guy who did my first tattoo said, this’ll either be your first and last or the first of many. He was right! I definitely think I’ll be adding to my collection in the years to come.

3.     What inspired you to get your first tattoo or favorite tattoo?  Tell me your tattoo story.

A few years ago I watched this film called The Tattooist starring Jason Behr. It wasn’t a great movie but there was a fantastic scene where the MC’s love interest runs her hands over his heavily inked back and chest. As she does so, he tells her where he got each one, his ink reading like a map of his life and all his travels. That scene gave me chills and made me want my own tattoos for similar reasons. Three of my five tattoos were done in Finland, I then have one from South Africa where I grew up and one from Australia (the one on my ankle) where I lived for 7 months. If I got a new tattoo every time I travelled, I’d run out of skin so I’m restricting my ink to places I’ve lived. I’m hoping to add a few more countries to my collection in the next few years. The story behind my first tattoo – other than being from somewhere I’d lived and to commemorate my exchange – is that I wanted something in Finnish. I love the Finnish language and looked at a bunch of quotes from songs and poems before settling on something incredibly simple and totally me: Minä uskon keijukaisiin, which is a tribute to Peter Pan and my determination to never grow up. It means ‘I believe in faeries’. My newest tattoo and first one with colour is of the Druidic symbol known as the awen which means poetic inspiration and is strongly associated with the idea of a muse or that seemingly extrinsic power that fuels our creativity. I like the messy hand-drawn style of my tattoos and never want anything to look too clean or precise, but more like a doodle and spilled ink. 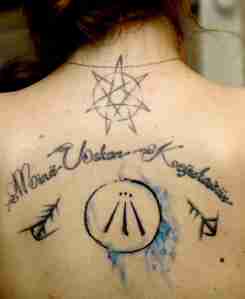 4.     Tattoos on a significant other, like or dislike? Explain why?

Love! I’m not a fan of facial tattoos or random images of tigers and pin-up girls, but I love artistic and meaningful ink. My husband only recently got a tattoo and I love how quintessentially geeky and how totally him it is. His tat is what he considers the most beautiful math equation:

5.     Do the character’s in your books have tattoos? If so, pick a character and tell me his or her tattoo story? Was this story incorporated in the book?

Oh yes. I wrote a short story for an anthology once where the entire theme was about tattoos. I don’t really have too many tattooed main characters in my YA novels though. In my latest novel The Other Me, my male MC’s best friend Dirk has a tiger tattoo clawing up his ribs because he’s trying to be a hardcore punk-rocker, and my female MC’s best friend Jordan has a tiny butterfly tattoo on her hip. In my soon to be published novel, I Heart Robot, my android MC Quinn has a tattoo on his left forearm. This is his identity code marking him as a certain class of android and is hard-coded into his DNA. He can never get rid of it despite the lengths he goes to trying to have it removed. His best friend also has tattoos, really impressive dragons inked onto her over-sized android skull. I’m starting to see a trend in my writing when it comes to BFFs and tattoos, lol! 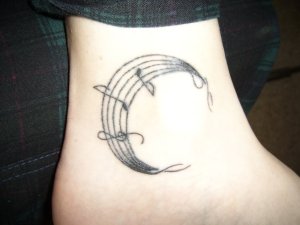 To learn more about Suzanne, connect with her on her blog and on Goodreads.

If you have a book coming out or just want to tell your tattoo story and want to be featured on Tattoo Tuesday, let me know by leaving me a message in the comments.