In my quests for finding employment, I applied to a writing network and was accepted.   My first assignment is due on Friday. So, hyped about this. In addition, I have a guest post to complete by Friday and two chapters of edits due on Monday.

And, to top it all off,  I sign up for a Short Story Contest, which is due on Friday. This is where I need your help.  The contest sets heats and everyone in my heat for this first round has to write in the same genre and use the same character.  I thought is would be a great challenge until I saw the genre.  I have to write a fantasy story.  I don’t have anything against fantasy, I just don’t read it and don’t know much about the genre.  It’s not the same as science fiction, right?

Huge favor – share with me your favorite Fantasy writers? I need a point of reference.

Do you have Ten Minutes?

Harry Widdifield, formerly know as Sevestian Winters (check out his guest post on my blog a couple of months ago, brilliant) has penned a new blog and a new journey in life as the Teller of Ten Minute Tales.  His goal is to write a short story a day.  He currently has two volumes for sale. I suggest you pick them up.  Great stuff and you can read a story in 10 minutes.  Who doesn’t have 10 minutes.

Have you read Harry’s short stories? What do you think?

PBC’s Successful Launch by M.L. Swift – I am so proud of my book club.

How to Push Past the Bullshit and Write that G-ddamn Novel:  A Very Simple No-F–kery Writing Plan to Get Shit Down by Chuck Wendig – Sometimes you just need some one to break it down for you.

You are Uncomaparable by MarcyKate Connolly – This goes along with my favorite quote from Bird by Bird,  “Jealousy is the business of comparing my insides to other people’s outsides.” It’s not worth it, so stop doing it.

What Came First:  The Scene or The Word? by Mike Reverb – I struggle with this as well. I see the scene in my head like a movie, but can’t seem to capture the same visuals and drama when I put it down on paper.

Things Every Writer Should Have by Nicole Pyles – another message about not comparing ourselves to other along with other great tips. 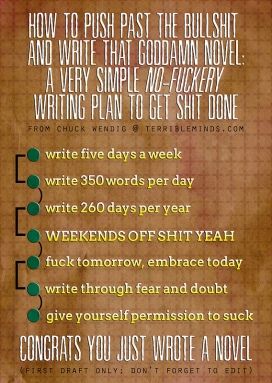