I hope you all are ready for this one. It’s my pleasure to introduce you to Ms. Jones.

1.   How old were you when you got your first tattoo?
I was 18 when I got my first tattoo… I was a freshman in college and needed my tramp stamp lol.
2.     How many tattoos do you have? If only one, do you want more?
I had five but the massive piece on my back covered my original lower back tattoo so I guess it’s just four now.
3.     What inspired you to get your first tattoo or favorite tattoo?  Tell me your tattoo story.
A few years ago my daughter’s father passed away. While we weren’t in an intimate relationship we were great co-parents. It was a very hard time for my daughter and me. I had this great idea to get his name tattooed with his sunrise – sunset dates, much to the disliking of my boyfriend at that time. So I did some thinking and as the months went by I finally decided what I wanted to do. The one thing my daughter’s father taught me is that pain is temporary… So while his memory is very much alive, the pain doesn’t hurt as much, almost to the point now I only smile when he crosses my mind. I grew past the pain and evolved into someone a little bit stronger, a little bit wiser. The phoenix is one of the most symbolic creatures of change and rebirth. Going through that tragedy was almost like a rebirth for me. It was my chance to do what I wanted to do with my life. So I did. This phoenix on my back is symbolic of a very pivotal point in my life. I changed direction, I started my company Phoenix Jones Publishing, and I’m doing what I love to do. And I think I’m pretty damn good at it too. Some of an artist’s best work comes out of those feelings of sadness and pain. 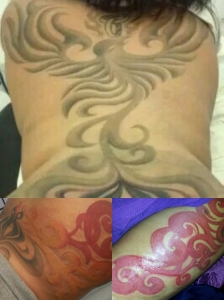 4.     Tattoos on a significant other, like or dislike? Explain why?
I love ink on everyone, especially significant others. I’ve been judged by non-tattooed guys like there was something wrong with me because I chose to express a moment in my life on my body. If you’re tattooed, I feel like you have a fairly open mind which is the kind of people I love to be around. I know that if even for a small moment you decided to add some permanent art to your body you can grasp why I love what I do so much. As an author, a painter, an illustrator, my art is a direct correlation to who I am and if you understand that freedom of expression, and undying dedication to creativity we’re kindred spirits.
5.     Do the characters in your books have tattoos? If so, pick a character and tell me his or her tattoo story? Why was this story incorporated in the book?
My latest release Loving Blake spawned a sequel Loving Nina which is set to be released July 2014! The character Wren is a lover of the main character Ana, in Loving Nina. Wren has an enormous chest piece of a wolf fighting a snake. The piece is meant to symbolize the struggle between the man he used to be and the man he has become. He’s always been a protector, especially with the women in his life, but now it’s slightly different. The piece is also there to cover up some scars he got while on the job as a bodyguard. He didn’t want to keep looking at it as a constant reminder that he had failed at what he was hired to do. It was incorporated into this story because his character is pivotal to the plot and once his truth is revealed it makes the story come full circle.
Thanks Tomara Jones for sharing your tattoo story. The phoenix is beautiful.  To fine out more about Ms. Jones and Phoenix Publishing, connect with her:
Website | Facebook | Instagram Phoenix Jones | Instagram A Love Jones

Pick up a copy of Loving Blake and keep a look out for her new release in July 2014, Loving Nina. 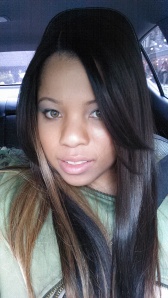 If you have a tattoo story to share, leave me a note in the comments.