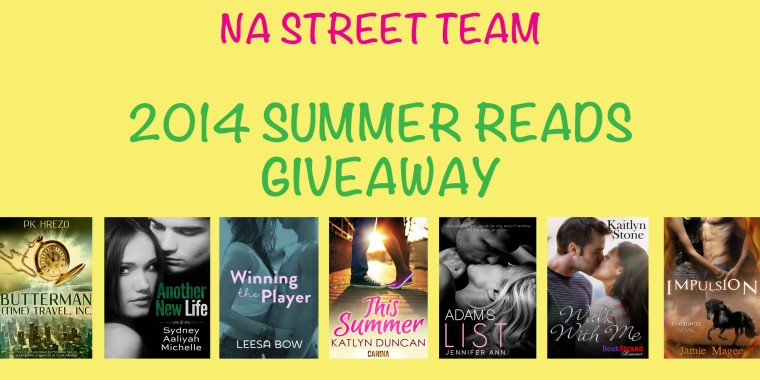 It is my honor and pleasure to share with you the 2014 NA Street Team Summer Reads List. To celebrate this occasion, we are conducting a rafflecopter giveaway.

Book Blurb: It’s the year 2069 and even though eighteen-year-old Bianca Butterman is heir to the family biz, she may never see the day her time-craft license becomes official. When a government agent starts nosing around the operation, Butterman Travel, Inc. gets stuck with a full audit—part of a government take-over scheme to shut down all private time travel agencies. Enter former boy band superstar, Tristan Helms, desperate to retrieve a lost item from his past and willing to pay triple fare for a time-trip to get there, and Bianca has to find a way to complete the job and return home before the government gets wind and shuts down the family biz for good.

Book Blurb:  Miranda Preston is a walking contradiction. Talented, smart and beautiful on the outside and insecure, haunted and damaged on the inside. Despite these contradictions, she’s ready for college and ready to start Another New Life.  An easy task, until the first guy who catches her eye happens to be someone, she’s known all her life.Eight years have passed since the last time Miranda and Troy saw each other. He reminds her of the best and worst times of her life, but she can’t think about one without dwelling on the other. As they grow closer, every day their attraction reminds them they are no longer kids. Can Miranda focus on her future with Troy while preventing her past from tearing them apart all over again?

Check out Another New Life on Amazon

Winning the Player by Leesa Bow

Book Blurb:  When injury destroyed her dream of playing college basketball, Aubree Taylor fled overseas. Now she’s finally home again and ready to move on with her life. Until she runs into Hunter Stone on her first night out, the only guy who’s ever meant anything to her – and the last person she wants to see. Since she ran out on him two years ago, Hunter hasn’t been able to get Aubree off his mind. The sexy football star has had girls all over him for years, but Aubree is the only one to have ever seen behind the cocky persona he puts on for the crowd. Despite her attempts to keep her distance, Aubree is unable to resist the strong attraction between them and it isn’t long before they fall into a passionate relationship. She has never been afraid of a challenge, but Hunter’s arrogance and inablity to trust are testing her to her limits. Aubree must decide whether to follow her heart and lower her guard…or risk losing the best thing that’s ever happened to her.

Check out Winning the Player on Amazon

This Summer by Katlyn Duncan

Book Blurb:  Before college, before responsibilities, Hadley Beauman and best friend Lily are determined to have a summer to remember. There will be all the usual dramas – ex-boyfriends who don’t seem to know what ‘ex’ means, pesky younger brothers with unrequited crushes, but what Hadley didn’t anticipate was the out-of-the-blue return of the seriously hot boy-next-door, Will Carson. The boy who broke her heart when he skipped town two years ago. Will may have shot up a foot and filled out (oh yes), but inside he carries the weight of guilt – for leaving, for coming back… Now he’s just passing through to tie up loose ends but it’s clear the old chemistry still crackles between him and Hadley. Trouble is, it’s built on two years of lies… This summer might just be the best time of their lives, but is Hadley ready for everything to change – again?

Check out This Summer on Amazon

Book Blurb:  Everyone wanted to be Jewels Peterson in high school. Naturally beautiful, exceptionally smart, talented cheerleader, life of the party, and with an All-American boyfriend to boot. One regrettable choice and fatal accident later, and Jewels found herself unceremoniously knocked off her pedestal. Now she’s in college, going through the motions, but not really living.  Adam Murphy is easy-going, charming, considerate, and crazy good looking; he’s exactly the kind of guy Jewels pictures herself being happy with. But Jewels is already involved with someone, and Adam makes it known that he’s guarding a dark secret, one that makes him the wrong guy for her. Trumped by the promise of an innocent friendship, Jewels is forced to ignore her overwhelming hunger for Adam.  After Jewels unknowingly helps Adam create a bucket list, they embark on the adventure of a lifetime that pushes their platonic relationship to its limits. But does she want to be with Adam without knowing the truth behind the skeletons in his closet, or is being with him just another pointless thing in her life?

Walk with Me by Kaitlyn Stone

Book Blurb:  What dictates the path in life we take and who we choose to walk with? After escaping her abusive parents, nineteen-year-old Kenna Sloane is determined to create an independent life, free of emotional distraction. The last thing this focused college student wants is a relationship, especially with a hot rookie cop popular with the badge bunnies.  When Kenna reluctantly agrees to a double date with Santa Monica cop Donovan Alexander, she’s launched on an exciting and dangerous journey. With time, she discovers some souls are instinctively drawn together to quiet the pain of their traumatic pasts. But even after the revelation of Donovan’s own secret burden, Kenna continues to battle the fear she may be too broken for her modern day knight in blue.

Check out Walk with Me on Goodreads – Available July 2014

Book Blurb:  With a glance Wyatt Doran stole Harley Tatum’s heart. With each summer that passed, touch by touch, they robbed each other’s innocence, birthing a love that was so deep that it scorched within. Without warning, they were ripped from the clutches of each other, placed in lives that were worlds apart. Only to cross paths after a freak accident where Harley’s horse rig was flipped. An accident that Wyatt Doran, from fire station 32, responded. The tension was immediate, the emotions were raw. One breath told them they were not the same as before, one touch…changed their world.

Check out Impulsion on Amazon

The rafflecopter will run for one week. We will announce the winner at our Facebook Party on June 23, 2014 at 8:00 pm Central!