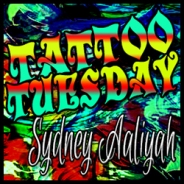 Have I got a Tattoo Tuesday for YOU!!!!

Take it away Lyndsay,

Each and everyone single one of my tattoo’s has a meaning. I currently have 6 tattoo’s, 3 individual ones and 3 that make up one big one that start my sleeve. They each cover a scar, a scar that remained from a past that I longed to escape, and I fount the best way to do it. What better way to start over then with something beautiful?

My first ever tattoo at the age of 18, it was a rash decision I’m not going to lie. I didn’t go to a tattoo parlor and get it done by a professional. I was visiting my cousin who by out of consequence had been doing tattoo’s. I knew exactly what I wanted so I told her and got it done the same day. You can imagine that it’s not very good right? The rule is always get your tattoo done by a professional. Even though she isn’t a professional, it’s my first and probably most memorable one. The meaning behind it will always be one I live by. I may think negative thoughts about myself or my surroundings, but I will only speak about positive thoughts. Don’t embrace the negative, instead embrace the positive. Because there’s always a silver lining, even on a cloudy day. 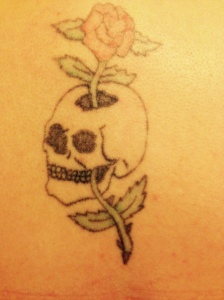 Now my next tattoo came a few months later, now this one I planned. I found a drawing online and immediately sent it to my friend for her to draw for me, it was everything I wanted. I had always loved Batman and the characters. My favorite was The Joker though. I saw a lot of myself in him, now I’m not a sociopath or a serial killer or anything but I just connected with him. His scars was a big part of it, he had scars that everyone could see, he didn’t try and hide them. It’s as if he wore them proudly even though they were a source of pain. Another thing was every time Batman defeated him, he never stayed down long. He got back up and he fought back harder. My next tattoo made me realize I can’t take my scars to seriously, I couldn’t take life to serious. I have to find something to life about, I have to find that strength to wear my scars proudly not because I’m ashamed of them, because I’m proud of them. They each represent a battle in which I lost, but I got back up and fought harder and I sometimes won. Because I have to lose sometimes and I’m okay with that. 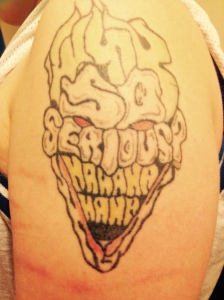 My 3rd tattoo as you can see is also Batman. Now as a little girl I didn’t spend my nights watching Disney movies, I spent them watching old batman movies. I watched every single film, night after night. I fell in love with it, and the whole idea of it. I didn’t have a hero growing up but Batman quickly became mine. Now the reason why I chose the Bat signal is for a number of reasons but i’ll give you the only one that matters most. For me, the Bat signal means hope. A hope that a hero is out there, hope that someone is always looking out for you, but most importantly that you can always find hope. So now I look down at my wrist everyday and I see scars, I see sadness but I can always find hope.

Now my last tattoo is a bundle of 3 which make up one big tattoo. Now this I put a lot of thought into it and I planned for months. This one probably means the most to me, because it represents the 3 most important people in my life. My brothers and baby sister. Now I’ll have to explain this one for you to understand it. I’ve battled self harm since I was 9 years old. It was something that got me through each day when all I wanted to do was give up. I didn’t think I’d have anything to fight for, anything to live for. Then by the time I was about to turn 11 came my brother Jude. He was born and suddenly I had something to fight for, because he needed me. I was the one to fed him, changed him and made sure he had everything he ever needed. He was my reason to fight, but then I also had another reason to fight as well, because along came my brother Alexandar. I did the exact same with him as I did with Jude. I was living with my dad when he came along but that didn’t stop me. I cared for them because they didn’t have anyone else who would. I struggled but I managed. Then Dixie came into my life. A little sister I always wanted but unfortunately 5 days after she was born Jude, Alexandar and Dixie got took away and went to live with there grandmother. I saw them maybe 5 times after that and I’ve not seen them since. That was 6/7 years ago. The stopwatch represents that no matter how much time has passed or much will pass, they’ll never leave my life and my heart. The birds represent that they may fly away but I’ll always be here waiting for them with a home and welcome arms. They’ve flown away and they’ve grown into such beautiful children, but it doesn’t matter if I’m not in there life anymore, as long as they are happy and they have the childhood they deserve then everything will be alright. They’ll hold a place in my heart and they have permanent place in my life. It may be in ink and on my arm but at least it’s close to my heart.

“It’s not who you are underneath, but what we do that defines us.”

Thanks so much Lyndsey, amazing story of over coming. I love you ink, too.

If you have a tattoo story and want to be featured on Tattoo Tuesday, leave me a note in the comments.

The Dark Knight Rises is the third installment in the Chris Nolan Batman Trilogy.  I was a good ending to a saga that began 7 years ago, in my life.  I have always enjoyed super heros movies;  Superman, Spiderman, Ironman, Hulk  and all the other Avenger greats.  I even enjoyed the Keaton, Kilmer and, dare I say, Clooney Batman Movies.  But, they had the comic book feel, which made the movies fun and enjoyable.   They were colorful, whimsical, and funny.  They were a good escape.  But, Chris Nolan’s Batman was different.  It was real.  It was dark, sexy, cruel, clever, complex and tragic at times. This last movie did its job.  It tide up the loose ends and concluded the trilogy brilliantly.

But, I had a few issues with the movie on its own. One issue I had was it just didn’t have the typical Batman'”swagger’ of the other two movies.  The first, Batman Begins, told you how it all started and the second, The Dark Knight was all about the Joker and  the greatness that was Heath Ledger (r.i.p.). In both films, Bruce Wayne’s persona was so radically different from The Batman.  It made sense and it was familiar.

This movie, Bruce Wayne was a little sad.  He was in pain for most of the movie, he didn’t dominate the fights, he didn’t have the coolest toys.  He was angry, but he didn’t know how to use it to his advantage.

The second issue I had was it didn’t have enough gadgets.  Lucious only showed us a couple of cool new things.  One was a new aircraft called the Bat.  It looked more like a small version of the alien ship in The Battleship Movie; not slick and ominous like the batmobile.  There was one scene where Bruce Wayne was walking the red carpet at a charity event and he used an electromagnetic pulse to shut off the paparazzi’s cameras.  That was pretty cool.  Nice dig at the paparazzi. Good one Mr. Nolan.

Nevertheless, I am a stickler for patterns and they didn’t show up in this one.  But, I enjoyed it for what is was.  The end of a story and an end of an era.  Now for the quotes:

Bane:  We are introduced to the evil Bane from the beginning scenes.  Is it just me or does he sound like Sean Connery?  Read the quotes with that voice in mind.
“Gotham, take control . .  take control of your city.  Behold, the instrument of your liberatation! Identify yourself to the world!”
“No one cared who I was, until I put on the mask.” The mask was a character itself.
“Calm down, Doctor!  Now’s not the time for fear. That comes later.”
“When Gotham is ashes, you have my permission to die.”
Captain Jones:  “I’ll die before I talk.”
Bane:  “I’m on your schedule, captain.” Bane was actually pretty clever.
Roland Daggett:  “You’re pure evil!”
Bane: ” I’m necessary evil.”  Bane was one evil bad ass.

Seline Kyle (Catwomen):  Anne Hathaway was a good catwomen.  She was helped by the outfit and the stunt coordinator, but she had the right attitude and her voice when she delivering the lines was really cool.
“There’s a storm coming, Mr. Wayne.  You and your friends better batten down the hatches, because when it hits, you’re all gonna wonder how you ever thought you could live so large and leave so little for the rest of us.”
Jim Gordon:  He was always one of my favorite characters because he loved his city of Gotham and no one said “The Batman” better then him.
“We were in this together, and then you were gone.  Now this evil . . rises. The Batman has to come back.”

Bruce Wayne (Batman):  Like I said, he was a little sad at times in this film.  He switched between, being a hero, to focusing on the greater good, to cocky savior.  It was a little confusing.
“This city needs me.”
“I need you to get me back in the game.”
“Tell me where the trigger is.  Then . . . you have my permission to die!”
Lucious Fox:  Another one of my all time favorites.  Lucious had the morals and the toys.
“I call him The Bat, and yes Mr. Wayne it does come in black.”

What did you think of the The Dark Knight Rises?  Did it meet your expectations?  What was your favorite quote?