Skip to content
Cupid worked overtime to deliver this Valentine’s Day treat. Cuddle up with a heartwarming collection of dog tales, kitty and horse stories, and true love with these all-new sweet romances penned by USA Today and international bestselling authors.


On January 31, the Valentine Pets & Kisses 2 boxed set will be released. In the meantime, feel free to pre-order since it’s only $0.99.
Today, I’ll be sharing a sample from Keeping the Spy, as well as a Dear Cupid letter. Make sure you visit for the next eight days to see what our heroes and heroines will be asking Cupid to deliver come Valentine’s Day. 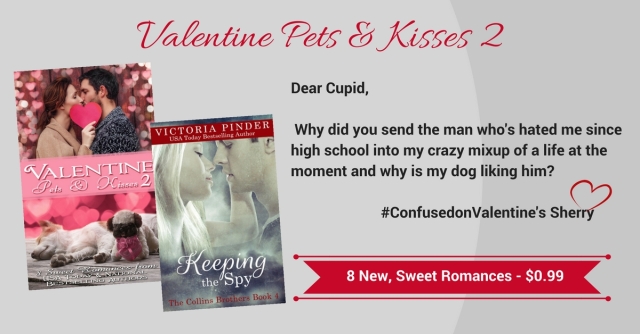 Excerpt:
Liam’s fists clenched under the table.
“There was also an art heist that same night. My sister-in-law took some heat as a false suspect.”
Victor would have no qualms about framing his sister-in-law, Kate. He’d also have no hesitation if Sherry ended up in front of the bullet intended for him. He continued reading and then saw an image of the diamond ring. Numbness grew inside him.
“When did they get engaged?”
“Over a month ago.”
Nebraska pulled up a picture on his computer of New Year’s Eve. Liam stared at the star-studded picture of Sherry right next to celebrities and the ball in Times Square. Victor was down on one knee.
“At midnight. The same night the Federal Reserve lost four hundred million dollars out of various accounts.”
“Crimes and romance don’t normally mix.” Liam closed his eyes. Sherry couldn’t be involved. “She would have no knowledge of any thefts.”
Nebraska’s chair squeaked as he turned toward his file cabinet. Picking up his water glass, he stared at it like he just found an old friend.
“We have every reason to suspect both of them.”
Liam’s collar was tight. Sherry was a good girl and would never be involved with crime or Victor. She worked in a library and last visit he’d spotted her in the donut shop selling donuts behind the counter, covering for her friend Angela.
He stammered a bit. “B-but, four hundred million is not a lot of money to steal from the Fed.
If you have access, they have so much more.”
“We all don’t have your trust fund, Collins.” Nebraska sipped his water. “I’ll send the case file to your tablet. Read it on the plane.”
Liam’s heart beat a mile a minute. “I’ll prove her innocent.”

USA Today Bestselling Author, Victoria Pinder grew up in Irish Catholic Boston before moving to the Miami sun. She’s worked in engineering, after passing many tests proving how easy Math came to her. Then hating her life at the age of twenty four, she decided to go to law school. Four years later, after passing the bar and practicing very little, she realized that she hated the practice of law. She refused to one day turn 50 and realize she had nothing but her career and hours at a desk. After realizing she needed change, she became a high school teacher. Teaching is rewarding, but writing is a passion.

During all this time, she always wrote stories to entertain herself or calm down. Her parents are practical minded people demanding a job, and Victoria spent too many years living other people’s dreams, but when she sat down to see what skill she had that matched what she enjoyed doing, writing became so obvious. The middle school year book when someone wrote in it that one day she’d be a writer made sense when she turned thirty.


She’s always been determined. She is amazing, adventurous and assured on a regular basis. Her website is  www.victoriapinder.com.

Pre-order your copy of Valentine Pets & Kisses 2 today and get eight sweet romances delivered to your reading device on January 31, 2017.