I bought this as soon as I read the blurb; military, Europe, cross countries, secrets  & blue eyes. All the things I like rolled into one book. – Sydney Aaliyah Michelle 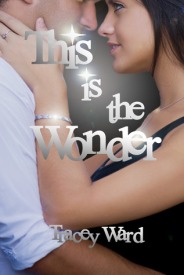 This is the Wonder by Tracey Ward

From the moment I saw him – all blue eyes and American pie – I knew I’d never be the same.

Determined to escape the pressure of her impending graduation, Wren Porter chooses to take a semester in Europe. She’s there to study, party, and hide from the question that’s haunting her – What’s next?

At least that’s the plan until one night in Munich when she meets Jax, an American soldier stationed overseas. He’s charming, he’s handsome, and in one small act of kindness he becomes Wren’s own personal hero. Suddenly the two are swept up in a mad romance that will cross countries, break laws, and leave them both breathless.

But Jax has questions about his own future and when reality comes calling their bond is put to the test. Are they only meant to have the nights they shared together in Europe, or could they be so much more?

Could they be the future they’ve both been looking for?

“I don’t write romances, I write relationships. One is pretty and perfect and all consuming. The other is real.”

I was born in Eugene, Oregon and studied English Literature at the University of Oregon (Go Ducks!) I love writing all kinds of genres from YA Dystopian to New Adult Romance, the common themes between them all being strong character development and a good dose of humor.

My husband, son, and snuggly pitbull are my world.