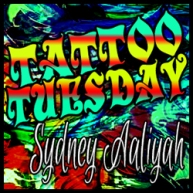 I’m thrilled to bring you this amazing Tattoo Tuesday Story!

Take it away, Matthew.

To understand the meaning of my tattoo, requires us to travel back to 2004. You see, as a wayward nineteen-year-old, I drank and partied and did what I liked. I’d also spent four months travelling Australia, and although I saw a great deal and met some of the most wonderful people I’ve ever had the pleasure to meet, in hindsight I wasted away my time.

I also wasted a lot of money on endeavours that ultimately lead to the same demise… the dreaded hangover.

But what fun. And if you can’t have fun at nineteen, when the hell can you? But I digress, for my tattoo story stems from another trip after Australia. A trip to Northern Kentucky, and YMCA Camp Ernst. A trip that wasn’t really a trip, rather my first real job.

Anybody who’s worked at a summer camp understands how real a job like this is, as it tests you in every single possible manner. Now, don’t for a second think I transformed into a born again Christian who never drank a drop again. I didn’t. I continued to do immature and wayward things for a long, long, long time.

Loving it oh-so much, I returned in 2005, and 2006, and 2007, and ended up spending eight summers within the walls of my spiritual home. I have no idea who I’d be without Camp, but I wouldn’t be the me of now. I doubt I’d write, for one. I doubt I’d live a creative life at all. In fact, I doubt a lot of things, but this is a what if I’m glad not to consider.

In 2010, I returned to Camp Ernst for a single week. In my late twenties, I had a real job with real responsibilities, but I couldn’t stay away. Like a drug, June came and sent me scurrying to the phone where I spoke to Eli (The Camp Director), pleading with her, “Can I come for a week? You don’t have to pay me! I just need to be there.”

At this stage, my once-upon-a-time campers were now my colleagues and peers. More important, my friends. Molly decided we should get a tattoo, and capture the moment and the meaning of a place we all hold dear in our hearts (despite the sleep deprivation, frustration, and low pay).

Five of us entered that tattoo parlour, with a simple design in mind: a triangle, because that’s the YMCA’s icon – an icon of strength, love, and equality; and the words, ‘This is goodnight, not goodbye’ – because these were the lyrics of Linger, a song we had all sung around the campfire hundreds of times before. 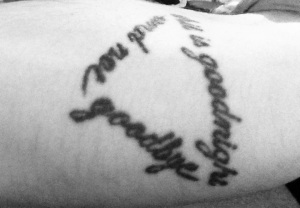 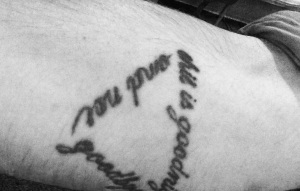 And it’s fitting, because I’ll never say goodbye to Camp Ernst, no matter how old I get. Saying goodnight to those we love is like a promise to see you soon. I like this, and so, in many ways, my tattoo not only captures my love for my spiritual oasis, and the meaning it’s brought to my life, but to those I love – those from the past, present, and the ones I’ve yet to meet.

On my right forearm, on Tim’s left, Molly’s side, Saunie’s foot, and Davey’s too, five people with the same tattoo, but in different, yet equally meaningful locations. We all have our reasons for loving camp, and we’ll be forever connected through ink.

And so, that’s my tattoo story. I plan to get many others, too. I like the idea of my arms and back and chest full of words and sentences I adore. Lyrics and quotes and sayings that mean something to me. But that’s for the future, and other stories.

For now, I have one, but it’s an awfully special one. 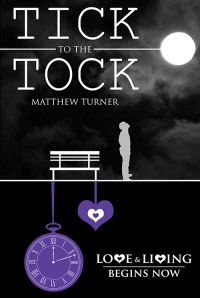 On the 16th September, TICK to the TOCK is having a Kindle Countdown Deal, so will be a mere $.99 🙂

Thanks so much, Matthew. Click on his book to pick up a copy.

If you want to connect with Matthew Turner, check him out on Goodreads.