For those of you new to my word, SQM stands for Sydney Quotes the Movies.  Every long running feature deserves its own catchy acronym.

I am fascinated by submarines.  The idea of living in a metal canister with artificial air for months at a time underwater is scary and cool all at the same time.  I love submarine shows(Last Resort) and movies (Crimson Tide), too.

I have even had the opportunity to tour the USS Dolphin in San Diego.

So, when I heard about this new film, I wanted to help spread the word.

Welcome to The Fitzroy:

Meet our Hero – Bernard The Bellboy 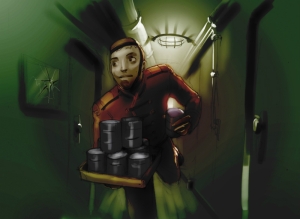 Meet the rest of the Characters

The Fitzroy is a live action black comedy set in an alternative, post-apocalyptic, 1950’s.  The Fitzroy hotel, a derelict submarine beached just off Margate, is the last place for a traditional summer holiday.

Bernard, the hotel’s overworked and under-appreciated bellboy, faces a constant battle to keep the rusting hotel afloat and ship shape.  But when he falls in love with one of the guest, the murderous femme fatale Sonya, he is thrown into a world of lies, chaos and literal backstabbing.

“Well you’ve got the beach, bit cold this time of year but still nice. Just stay way from the sewage outlet.”  – Bernard
“WAKE UP YOU GOOD-FOR-NOTHINGS! I SAID WAKE UP AND GET OUT. GET OUT WHILE YOU STILL CAN.” – Mr. Thompson
“A business partner, a co-owner, a lover. Whatever you want to call me.” – Sonya
“MURDER. “Murder” – you say it just like that, like it’s nothing, just murder that’s all. Murder.” – Bernard (I think I am going to like Bernard)

The shooting production budget for The Fitzroy is £50,000. They are looking to raise £60,000 through the crowdfunding site Kickstarter, which, once Kickstater’s fee and the reward costs are removed, should leave them with £50,000. Opportunely, Kickstarter UK launched on the 31st October just in time for The Fitzroy campaign.

Kickstarter is the best-recognised and most respected crowdfunding website. It’s full of ambitious, innovative, and imaginative projects that are brought to life through the direct support of others. Since their launch in 2009, over $350 million has been pledged by more than 2.5 million people, funding more than 30,000 creative projects.