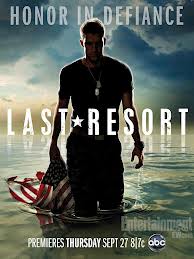 I was watching one of my 4 English channels.  Yes, my much anticipated move to Shanghai reduced my tv watching options.  Recently, they have been heavily advertising a new show called Last Resort.  It stars Andre Braugher and Scott Speedman(the hot guy from Felicity).

One marketing tool they use in Asia is marketing the show as airing the same week as the US telecast.  I don’t really get that one, I mean really, who cares.  It’s not like I am calling up my friends in the US to see if they caught the latest episode of The Amazing Race season 400.  It’s kind of an expensive call, we stick to important topics.

But, a more effective marketing tool they are using is 15 second character profiles.

The first profile they show is of Scott Speedman’s character, Sam Kendal.
In 15 seconds you learn:
Sam is the XO on the USS Colorado.
He is the morally conscious character.
He spells charm without a c. (not sure what that means)
Committed and Determined
He’s as loyal to his country as he is to his wife.
*Imagine these lines delivered by the movie trailer guy voice.

In an action packed promo, they tell who he is, his motivation and his role in the series.  They use images and quotes from him that make you instantly like him, relate to him and want to root for him.

In a clearly action packed type series; regular promos show submarines, bombs, and drama, drama, drama,  ABC understands in order to have a successful series long term, the audience has to get to know and care about what happens to the characters.

This is a great tool to use in book promotion as well.  A book and a television series are similar in they takes some commitment from the reader and view in order to be successful.  If you don’t like a movie, well, you only committed a couple of hours.  No big deal. But, most series want you to stick around for at least 20 episodes. In books, you want people to read until the last page.

So, how do you keep people turning the page until the end.  They have to either like, hate or at the least, relate to the character. So, why not tell them about your characters early on in the promotion of your book.

My MC Character Profile:
Sierra is smart, funny and reliable to a fault.
But, when it comes to her own happiness, she has a history of putting others needs above her own.
When she meets John, she realize she could easily fall into her old patterns, but she is determined to not let that be her legacy.
*In the movie trailer guys voice.

Use your characters in your marketing to get a head start on letting your audience know why they need to read your book.

Also, it doesn’t hurt to have an awesome  quote like the one used below in every Last Resort Promo.
“I am not going to annihilate  3.4 million Pakistanis without hearing directly

from someone whose authority that I recognize.” Marcus Chaplin played by Andre Braugher.

Share three statements about your MC that will make readers want to read your book.

6 thoughts on “Character Profiles as a Marketing Tool”